One of the most iconic and well remembered Persons of The American Old West would be without a doubt the legendary William Cody. Or more precisely, “Buffalo Bill”. American Trapper, Hunter, Army Scout and of course, Entertainer, it was Cody himself who would create much of the mythos regarding Peoples perception of The American “Wild West”. He accomplished this notice only in The United States, but in Europe as well, with the creation of his “Traveling Show”, known as The Buffalo Bills Wild West Show and The Congress of Shooters.

Born in Iowa Territory in 1846, Cody had to go to work early in life to help support his Mother, after the death of his Father (by some accounts, age 11). Lying about his age. He secured a position as a Rider with the famed “Pony Express”. At age 14, with the start of The American Civil War, Cody tried unsuccessfully to join The Union Army. Undaunted, he was able to become a Civilian Scout with The 3rd Cavalry. Continuing on with thus, he would become Chief of Scouts during the later Indian Wars. His courage in battle earned him only 1 of 5 Congressional Medals of Honor ever issued to Civilian Scouts (due to changes in issuance to only Enlisted or Officer Personnel,  his Award was revoked on 1872. It would be reinstated in 1977 by Act of Congress).

His colorful and well known nickname of “Buffalo Bill”, came from his procuring Buffalo Meat for The Army. It is recorded that Cody provided over 4,200 carcasses between 1867-68. In the course of his life, Cody met and became friends with other famed (and Infamous) personalities from The American West. His name was well known and for the most part respected. In 1869, Cody met Ned Buntline, who wrote “Dime Novels” about Western Lore. These were very popular in 19thCentury America. Cody was made legendary as a result of these. His tales and adventures during his Scouting days, created his “larger than life” persona.

Perhaps by way of promotion, Cody and several friends, began to perform Shows for Crowds. Trick Riding, Roping and Shooting – thrilled the Crowds. This gave him the idea of expanding these performances. He slowly began to assemble the best performers in each skill. Cody also began to contact old “Heroes”, offering them employment to join and perform in his Show. The “Wild West” Show was born.

Traveling much like a Circus, Cody went back East and enthralled Audiences with his thrilling Shows. Song, Dance and Music – as well as reenactments of famous “Indian Battles”, were performed. Stagecoach “Robberies”, with “The Bandits” always being aporehended, were performed 3 times per day. Cody also brought into light, Easterners perception of The Native American. Although Cody fought against them as a Scout, he noted them no ill will, as most Americans (fueled by propaganda), did. Cody employed “real” Indians to perform in his Shows (albeit adorned in full “War Paint and regalia). Chief Sitting Bull performed for Cody as well.

The highlight of the Show wad the “Grand Parade” at the beginning of a performance. All Performers rode on every breed of Western Horse imaginable, in a great Ride past the Crowds. Cody headed the procession, carrying a great American Flag.  By the 1890s, Cody had become one, if not the most celebrated Show men on America. He took his Show overseas to Europe. Cody performed for England’s Queen Victoria, The Pope in Rome and just about every Crown Head on Europe.

Eventually, his age – coupled with his many injuries from The Indian Wars (including a knife attack by a drunk), caused Cody to succumb to falling Kidneys at age 70 in 1917. His brand of Western Show was (and us still) copied and performed to this day. 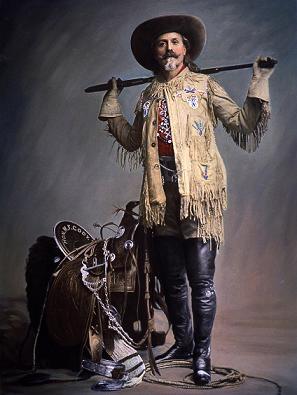