Born in Ireland in 1829, Brady came to The US with His Family during The Great Potato Famine on the 1840s. Finding work hard (as it was for most Irishmen), He joined The US Army in 1851. He became a Sergeant with The Cavalry, only to muster out (Honorably) in 1856. When The US Civil War began in 1861, Brady would join The New Mexico Militia (as an Officer), fighting against The Confederate attempted ''invasion'' of The Midwest. Later promoted to Captain, Brady would command at Fort Stanton (New Mexico) and lead several successful campaigns against The Apache. He would be receive an honorary (Brevet) Rank of Major when He mustered out after The War in 1866.

Settling in to Lincoln, New Mexico – his War Service would help land Him as the Towns elected Sheriff. Due to not having an adequate Jail (although He pleaded with The Town Mayor and Council to procure funding), Brady suffered from many escapes (using his broken down facilities). Although not His fault, His reputation did suffer.

As we have seen with the previously discussed ''Lincoln-County War'' in 1878, ''sides'' were taken. Perhaps Brady had gotten resigned to the fact that being ''honest'' simply did not ''pay''. He took up with The Cattle Bosses in the fray. This put him up against The ''Regulators'' and William Bonney (aka ''Billy The Kid'').

It was Brady and His ''Deputies'' (sworn Outlaws) who shot and killed John Tunstall (The Kid's Boss) while serving a warrant for His arrest. This enacted a ''blood oath'' from The Regulators to seek justice. Billy The Kid and The Regulators set up an ambush in 1878 from a covered mountain pass. Brady and His Posse ran right into the trap. Brady was shot several times by rifle fire and died (as did the rest of His men).

Brady's death would cause a warrant to be issued for The Kid (of which He was finally arrested for in 1881). While awaiting trail for Brady, The Kid escaped (no doubt thanks to the same poor confinement facilities that Brady begged to be fixed). The Kid's escape would put Sheriff Pat Garret on His trail – one that would end with a similar ambush, but this time it was Billy who would die in July of that year. 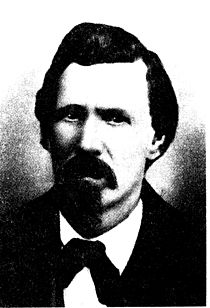