White Castle is located in Monmouthshire, Wales. A defensive structure part of a “Three Castle” defensive structures system, it dates to the mid-11th Century. It's name “White” is due to the whitewash used to stain the Perimeter walls. Originally a wooden defensive construction commissioned by William The Conqueror, White Castle was built on an upper Motte (surmounted twin smaller Baileys). Due to open and wide land, the “Three Castles” were built to provide protection of the area (and support to each other). White Castle featured in several Baronal Rebellions (eventually falling under Royal control of King William and later King Stephen. By the late 12th Century, much of Castle was rebuilt in stone. 4 Round Defensive Towers were added to the mostly rectangular shape of White Castle. The Possible squared “Norman Style” Keep was also demolished at this time. Edward III ordered White Castle and her sister defensive structures garrisoned during the many Welsh Uprisings. Although they White never saw active military action past that point, time was spent in the 14th Century on some minor renovations. By the 15th Century however, White was abandoned and was left to ruin. Falling into Private Ownership, White was eventually restored as best as could be done in the 1920s. White may have once featured a “wet moat” (with a still existing Drawbridge for controlled access into the Castle). Evidence of a Great Hall, Chapel, Kitchen and a Brewhouse have been found (foundations). Most of the interior (wooden) flooring is gone (not replaced). The walls are 10-feet in some spots. 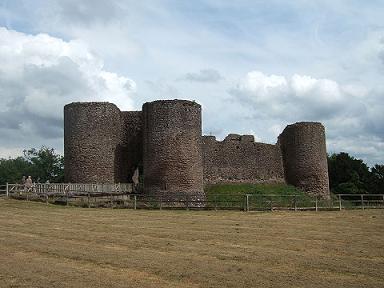