These monumental defensive structures are located in Central Spain and were designed to protect the City of Avila. Work on the walls started as early as 1090. The walls were built as a protective defense against invaders and sieges. On average, the walls are 15 to 20 feet thick and range from 20 to 35 feet high at some points. There are 9 different access Gates to the City (constructed at different periods). The Walls were an important feature during The Reconquista Period, as Avila was an important City for the reconquest from Moorish influence. By the 14th Century, the grow in population causes many non-defensive structures to be built up next to (or even part of the wall systems). This makes the majority of the walkways for the wall unsafe today. A series of Rounded and Horseshoe Pattern Defensive Towers, ring the walls at every 15 feet. They were designed to repeal siege equipment originally. As time and technology progressed, some of the towers were renovated into cannon platforms (for artillery). Over half of the towers fell from lack of upkeep between the 18th and early 20th Centuries (although great measures in preservation the last 50 years have repaired many). 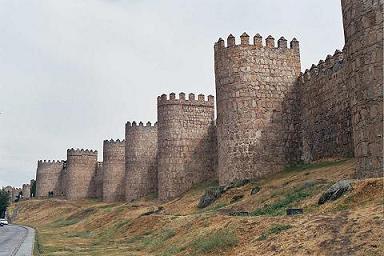