The Voyageurs were a form of ''Transportation Service'', which worked along with French Canadian Fur Trappers and Hunters. They were responsible for almost 90% of all transportation of pelts and furs from throughout Canada, to Port Towns and Villages – for shipment back to Europe (France). The Voyageurs were seen as a critical component to the development of ''New France'' (Canada) and establishing a foothold on The Region. From the early 16th Century through the 1760s, Voyageurs functioned. Even with the eventual British occupation of Canada (as a result of The French and Indian War), Voyageurs maintained their trade (ending around the early 1770s).

The Primary mode of transportation was The Canoe. Larger and wider than a traditional version, this was constructed as such to accommodate the vast amounts of pelts and furs that were moved. Often 5 to 7 such Vessels were sent to Port at the same time. This ensured the maximum amount (for profit) was reached (owing to lose from attack by hostile Native Americans or hazardous weather). Neither really stopped the dauntless actions of The Voyageurs.

Often working for ''themselves'', Voyageurs often entered into two contracts. The first was with the Consortium of Trappers (if they were not hired by a Trading Company), and The Captain of The Vessel transporting the goods back to Europe. In this way, Voyageurs were seen as a highly lucrative Occupation. Voyageurs were broken down into two Classes. The Voyageurs and The Engages. The Engages were common labormen. Often Immigrants, they served as basically ''backs'' for rowing and lifting. They also often worked as indentured servants to an established Voyageur. In this way, they also ''learned'' the Trade as well as various routes of transportation. Unfortunately, most Engages died on their treks.

Much as a modern Trucking (Transportation) Agency, Voyageurs were on a strict time schedule. This was die to the fact that pelts and furs were uncured (processed), and needed to reach their Port for preservation prior to their trip across The Atlantic Ocean. Often, 50-miles of riverways needed to be accomplished per day. If a worker was sick or injured, one had to suffered or apply temporary treatment. Often, such workers were simply left behind in the wilderness, to their own fate – rather than slow down the route.Voyageurs would become somewhat legendary in their experiences, with oft told ''Tall Tales'' developing from them. Many of the legends of French Canada tell of great stories of heroism and determination. 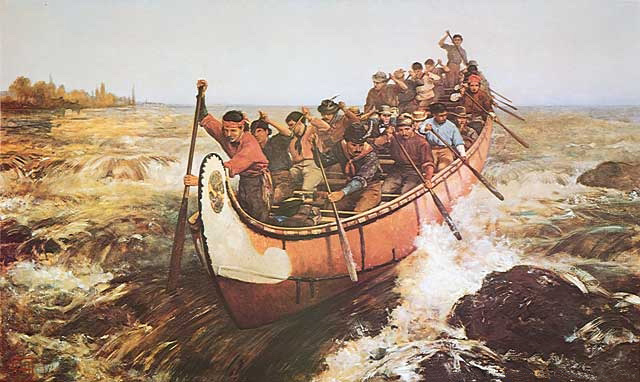