The iconic Non La Hat, while not indicative to Vietnam, was a hand made conical shaped Headgear worn by “Common” People  (mostly Farmers). Sometimes referred to as The “Coolie” or “Rice” Hat, it is actually thousands of years old on design. Farmers working in the mostly hot and humid climate of their Rice Stalk Fields (known as “Paddies”), used the Non La as a cheap way to prevent Sun related illness. Made from pressed Rice Stalk and later Bamboo slats, an over placed weaving created a surprisingly strong type Hat. The Non La was worn with a deep set on the head – more or less wider at the head (again to shield one from The Sun).

With French Colonialism in the 1880s, The Non La became a popular “Tourist Gift”, with Europe seeing an influx of them as a result. Their iconic appearance however became cemented into the popular consciousness with both The French Indo-Chinese War of the 1950s and Americans own Vietnam of the 1960s-70s. The Non La was worn, early in both Wars by the indigenous Viet Cong Guerilla Force that fought in both North and South Vietnam. Somewhat mistakenly, many Viet Cong would quickly adapt to the well known (and often captured or recovered) US Soft Jungle Patrol Hat known as The “Boonie”). However, the image of The Non La was set for the duration of The War. Variations of The Non La is still found today in Southeast Asia. 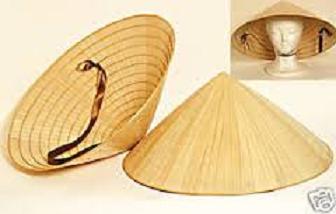