Built by The US Navy in 1861 (and launched in 1862), The “Kersarge” was a Sloop-of-War Class of vessel. At 1,500 displaced tons, she sat almost 40-feet in the water. Capable of both steam and wind power, she was armed with 7 “large” caliber guns (her largest being The Dahlgren). Capable of 13 mph, “Kersarge” was fast and deadly. Her main function was to hunt Confederate Blockade Runners in The Atlantic Ocean. It was by no stretch than everyone of her Crewmen knew what that meant – the taking on of the equally deadly CSS “Alabama.” Arriving in Spain in 1862, “Kersarge” was fitted with 3-inch armor plate along her hull deck quarter. In addition, some 720 feet of chain-link was placed in “hull gaps” for reinforcement. She would eventually be well prepared to met her rival, the CSS “Alabama”.

They met in 1864 of the coast of Cherbourg, France. The 2 ships danced their deadly “ballet” for around 1-hour, until – badly battered by the Union Ship, “Alabama” suffered a direct hit to her stern. On fire, she sank. “Kersarge”was hailed a hero ship for ridding the Seas of one of the most prolific and profitable Rebel Blockade Runners in The Civil War. Not undone before she sank, “Alabama” severely damaged “Kersarge” in the battle. 17 members of her crew would be awarded The Nations highest award – The Medal of Honor, for their actions during the fight. Refitted and re-commissioned many times during her pre-war history, “Kersarge” would eventually be lost in a storm off The West Indies in 1888. 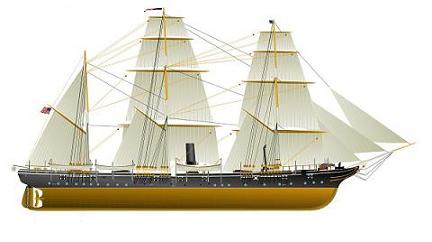