One of three "Yorktown"-Class Aircraft Carriers commissioned by The US Navy - "Enterprise" was only three such Ships used as Aircraft Carriers the beginning of America's involvement in World War II. Launched in 1936, she participated in more engagements against Imperial Japan, than any other US Combat vessel.  Displacing 26,000-tons, "Enterprise" was 825-feet long and stood 109-feet high (Beam). She featured 2 to 4-inch armor plating throughout her structure. Crewed by 2,200 men, "Enterprise" was powered by 9 Babcock Boilers and 4 Parsons Steam Engines. She had 4 Shafts and could achieve 38-mph. Her Operational range was 13,000 miles. As a Carrier, she featured twin Flight Decks  accessed by 3 massive elevators (connecting her many Decks). The Secondary Deck stored up to 90 Combat and Reconnaissance Aircraft, with areas for storage and maintenance. Her armament included (8) 5-inch Guns, (4) Quad 75mm Auto Cannon, (24) and .50 Cal. Machine Guns (from 1936 to 1941). After 1941, additional weapons were added. These were (30) 20mm Cannon and (54) 40mm "Bofors" Anti-Aircraft Guns.

Assigned to The US Pacific Fleet in 1940, she was berthed at Pearl Harbor, Hawaii. However  (with a severe disappointment to Japan), "Enterprise" was on maneuvers during their attacks on December 7th. She was considered a major target. On December 10th, it was an Anti-Submarine Flight from her Decks that sunk the "first" Enemy Sub of The War. In 1942, "Enterprise" and her Sister Carrier "Hood", participated in the first Airstrikes against Tokyo, Japan - when they launched The Doolittle B-25 Mitchell Bombing Raids. "Enterprise" was also instrumental during The Battle of Midway (also in 1942). The battle settled "the score" of Naval Supremacy between America and Japan. Most importantly, several of Japan's Carriers used in Pearl Harbor, were destroyed (a major propaganda boost to The American War effort).

The USS "Enterprise" (nicknamed "The Big E" and "The Grey Ghost"), received 10 Battle Stars for her actions in World War II. In 1945, after The War, over 10,000 American POW were brought home from both Europe and The Pacific on her Decks. She also brought home over 5,000 British Soldiers as well. Eventually docked in New York City Harbor from 1946 to 1948, she was broken up for scrap. However, due to her Service record, much of her was saved and incorporated into America's first "Nuclear" powered Aircraft Carrier - also named "Enterprise". 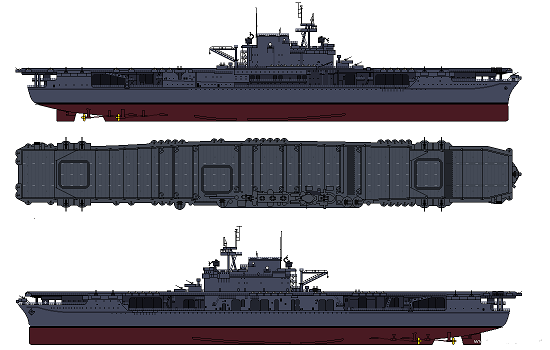