The “Antares” was built at the end of World War I (1919), as the namesake of The “Antares” Class of Cargo and Transport Ships, She was also The Flagship of The Commander of that Service. “Antares” was assigned to The Atlantic Squadron and later was sent to operate in The Caribbean. She was eventually deployed with The Pacific Fleet in San Pedro, California – eventually moving with The Fleet to Pearl Harbor in 1938.

Her primary Mission was to establish a Seaborne supply line with The Philippine Islands and Hawaii. It was on December 7th 1941, that “Antares” made History. That morning was the day She first sighted the entrance to Pearl Harbor (returning from a run in The Philippines). “Antares” Crew (along with The Mine Sweeper ''Condor'') sighted what appeared to be a Submarine Telescope out side the Anti-Submarine Netting. Having no offensive or defensive weapons, “Antares” radioed the Light Destroyer USS ''Ward”. She investigated and (as History shows) engaged and possible sunk a Japanese Mini-Sub.

Soon afterwards, Pearl Harbor exploded in the onslaught of The Japanese Dive Bombers. “Antares” wisely stayed out of The Harbor (in case she was sunk and blocked it). Japanese Fighter strafed her Decks several times during The Attack. Afterwards, she prepared to begin repairs of the damaged Fleet, when she was fitted with (2) 5-Inch Guns and (4) 3-Inch Guns. She was tasked to being re-supply of the many far flung Army Camps, dotting The Pacific in and around The Philippine Islands (anticipating a Japanese Attack or Invasion.

“Antares” would continue to serve in her capacity of Supply Ship throughout The War. She also again engaged The Imperial Japanese one final time in near Guam in 1945. Sighting a surfaced Japanese Submarine, “Antares” engaged Her Enemy. Damaging The Sub, “Antares” radioed for Air Support and The Sub was sunk. Remaining on Service after The War until 1946, “Antares” was sent back to California and decommissioned. She was sold for scrap. 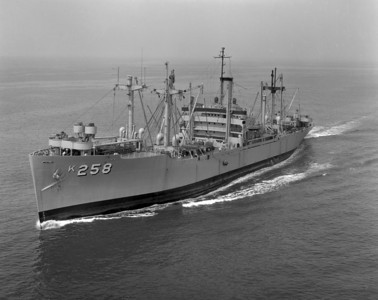