Named for The American City of Akron, Ohio – The US Naval Airship USS “Akron” was one of (2) Rigid Airships designed and developed in the early 1930s, for Military Observational use. Since the 1920s, America (as had Germany and England), pushed their Militaries for the development of “lighter than air” Aircraft. American had several “successful failures” prior to USS “Akron” (with the example being the tragedy of The USS “Shenandoah”). “Akron” and her Sister Airship “Macon” were the direct result of those misfortunes in both design and execution.

Construction of “Akron” began in 1929, and she was completed in 1931. Considered one of the largest Airships built after The “Hindenburg”-Class, “Akron” measured 785-feet long and was 33,000-square feet. Her internal skeleton was made of Duralumin alloy, with her circular ribbing stretching 75-feet in diameter. Her “skin” was rubberized cotton, painted or “doped” with a silver, anti-charge chemical. “Akron” used Helium (long considered a safer alternative to Hydrogen) Gas, which was kept in 12-Gas Cell “bags”. It took 6-Million cubit feet of Helium to life The “Akron” (which had a 160,000-pound lift). She used (8) Maybach 650-HP Gasoline Engines which gave her a 65-mph top airspeed. "Akron" could range over 6,000 miles.

A Military “vessel”, The USS “Akron” crewed 60 Officers and Men. In addition to her obvious observational abilities, “Akron” carried up to (5) Aircraft (“Sparrow” Bi-Wings). Dubbed a flying “Aircraft Carrier”, The “Akron” could actually serve as an in-flight launch platform. Due to her special needs, a specially designed “Tender Ship” was designed, which allowed “Akron” to dock at Sea if need be.

“Akron” was the first Airship to traverse the entirety of The Continental United States (New Jersey to California). She did experience several accidental crashes due to weather related issues. Her swansong came on May 3, 1933, when (over The Atlantic, off the coast of New Jersey), “Akron” was rapidly taken upwards by an updraft into a severe thunderstorm. Crashing into the Sea, only 3 of her 76 man Crew survived (making “Akron” the worst Airship disaster in History). Of note, one of the casualties was Rear Admiral William Moffett (considered the Father of Naval Aviation and a proponent of Military Airships). 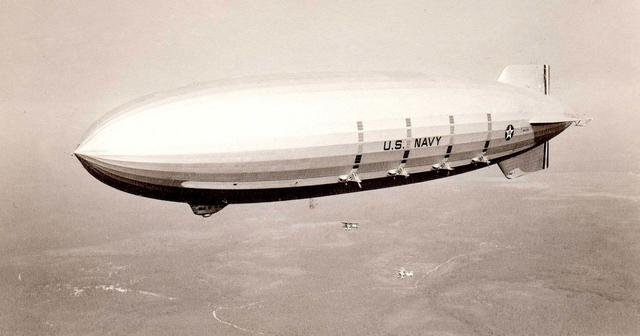