Designed for use by the Elite World War II American Commando Unit "The Raiders", The USMC "Raider" Stilleto was as favored by The Canadian Parachute Regiment. Both Forces needed a fighting blade that could be carried and used effectively on clandestine operations. The Stilleto Dagger design was chosen. Base on the then recently manufactured British Fairbairn-Sykes Knife, The Raider blade was constructed differently. Whereas The Sykes blade was a two-piece construction, The Raider was a single-cast construction. The Raider blade was also 0.25-inches longer. The knife weighed about 1.5-pounds.

The double-edged, tapered blade was excellent for piercing the ribcage/torso, even through up to 3-inches of clothing. The often described "Coke Bottle" shaped handle provided excellent grip, even with "wet" hands. Carried in a plain leather scabbard, The Raider Stilleto was considered more "elegant" than the standard issue Marine Fighting Knife  (known as The "Ka-Bar"). However, with the disbanding of The Raiders after The War, the blade was discontinued in favor of one single standard issue (again The Ka-Bar). 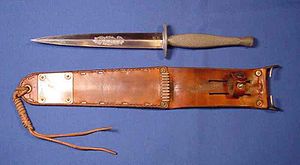