While the iconic ''Red Flag'' of The US Marine Corps. is well known throughout The World, prior to 1939, The US Marines did not have a Service Flag. Other than The US National Colors (The ''Stars and Stripes''), none existed. In fact all US Branches of The Military did not. However, the need to identify various ''Regiments'' (and used by The Marines), needed to be identified in The Field. Authorized by The US Navy (who was among the first to incorporate a ''Naval Infantry'' Flag since 1864), The Marine ''Blue'' Flag was created and existed from 1916 until replaced with The Service ''Red'' in 1939.

Based (in part) on US Army Regimental Standards (in use since the late 1850s), The ''Blue'' Flag was a Blue colored Field in entirety. Centered, was The EGA (''Eagle, Globe and Anchor''), which was the official insignia of The Marine Corps. since the 1890s. This image was partially colored, with more emphasis placed on the Federal Eagle (colored). The Insignia was surrounded by a Green colored Wreath. Typically, Twin Bannerolls were placed on the Top and Bottom of The Insignia. In general cases of display, The Upper label read ''US MARINE CORPS.'' with a Lower label bearing The Latin inscription of ''SEMPTER FIDELIS'' ''Always Faithful'' (The USMCs Motto). In Regimental usage, The ''Blue'' Flag was identical, with the exception of the wording used. The Upper label featured the written pronunciation of the numerical identifier of The Unit (eg ''Fourth'' Regiment''). The Lower label was changed to ''US MARINE CORPS.'' After 1939, The ''Blue'' Flag was replaced with The ''Red'' Service Flag – currently in use. 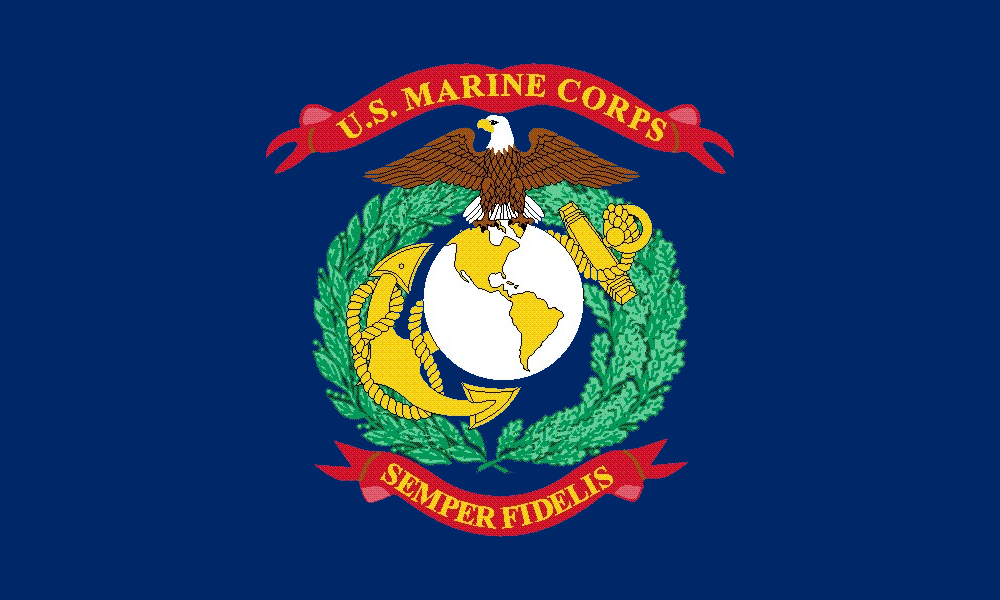