Before a separate Armed Service, The US Air Force was under the auspices of The US Army – and identified as The US Army Air Forces (1943 to 1947). Much of their uniform and distinctive insignia was similar to (or based upon) the then current US Army issuance. Much like The Army's Qualification Badges (worn by Enlisted Men to denote their level of training in a specific field or skill), The USAAF wore related badges for their Personnel. Badges were worn on the Dress Uniform, Left Pocket Flap (as they are today still within The US Army and US Marine Corps.)

The Badges were Silver in color and shaped in a circular patterned Wreath with an Aircraft propeller placed in Center. As previously discussed, a series of attached metal Tabs were worn (one over the other), with the type of Qualification Personnel were rated in. In The USAAF, this could be Gunnery or Mechanical (Repair).

When The USAAF became The US Air Force in 1947, The Badges were still used. After the 1950s however, they were discontinued in lieu of using Ribbons to denote the various qualifications for Gunnery (with none assigned to mechanical repair). Some surviving Veterans of The Era are still authorized to wear their Qualification Badges for ceremonial purposes. 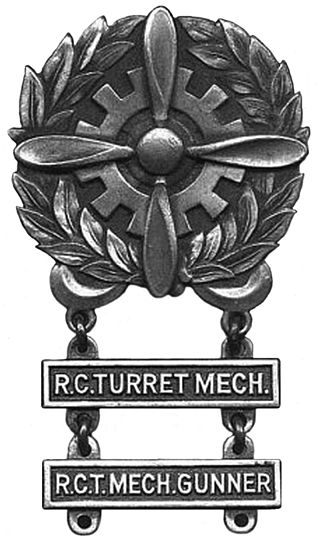