The Vultee Company advanced several prototype Fighter Planes during World War II. While few were excepted for actual combat usage, their designs would serve for later examples of proto-Jet Fighters. The XP-54 (nicknamed The ''Swoose Goose'' is parody of Aircraft Magnate Howard Hughes mega Transport Plane design The ''Spruce Goose'') – was a ''Pusher Engine'' type Fighter. Pusher Engines were not a new innovation to Military Aviation, with early examples experimented (and even deployed) during World War I. However, very few were developed for use by either Allies or Axis Powers. Cost over runs as well as more emphasis placed into experimental Jet and Rocket powered Aircraft took precedence.

Only (2) XP-54s were ever produced by 1943. Piloted by (1), The ''Swoose Goose'' was 55-feet long with a fixed wingspan of 54-feet. It's Rear positioned Engine was a Lycoming 2470 Experimental Model, which produced 380-mph. Operational Range was rated to 500-miles with an altitude ceiling of 38,000-feet. The XP-54 was designed to support both Twin Wing Mounted .50 Caliber Machine Guns and multiple 30mm Cannon. The prototypes performed quite well during tests when the Contract was canceled shortly after their first test. 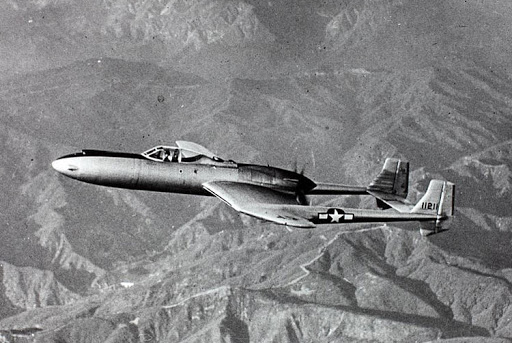