United States Volunteers, also known as USV, or The Volunteer Army of The United States, was a Volunteer Military Organization – raised to support The United States Army. They were first raised at the start of The American Civil War of 1861, and would continue until the end of The Spanish-American War in 1898.

Since the formation of The American Colonies (early 17th Century), the practice of raising Militia was a common thing. Composed of Town Citizens, roughly 16 to 50 years old – these “Soldiers” would come together to defend a Town from an Enemy or threat by force of Arms. These Soldiers were not Uniformed and provided their own weapons and gunpowder. In the beginning of Militia Service, Members came together perhaps once a month. Companies were commanded by elected Officers and Non-Commissioned Officers. In theory, a Militia met to practice Drill and maneuver.

With the advent of The French and Indian Wars in The American Colonies, Great Britain pressed many of these Militias into Royal Service to The British Army. Officers were often given Commissions in The British “Colonial” Armies, and these Men did wear The King’s Uniform, Soldiers did not.

The practice of Militia would extend to State funded Militias, by the start of The American Civil War. By this time, rules governing how The Government could use Militia were set forth. When a Militia was called into Government Service, it was “Federalized”. It’s designation was changed to “Volunteer”. They were mostly often issued Government Uniform and given Government equipment. Volunteers were seen as an augmentation Force to the “Standing Army” (which was often small in Peacetime).

By the end of The Civil War, the need to formalize a “ready” Volunteer Force became realized. The creation of the short lived “United States Volunteers” (identified by the “USV” insignia), began with The Spanish-American War. The vast majority of Soldiers were Volunteers – who served in The War with Spain.

After The Spanish-American War, the majority of Volunteers Units were used in the creation of The National Guard and Reserve Components of The United States Army. National Guard Units are administered by each individual State, unless they become Federalized (as was the practice since 1621). 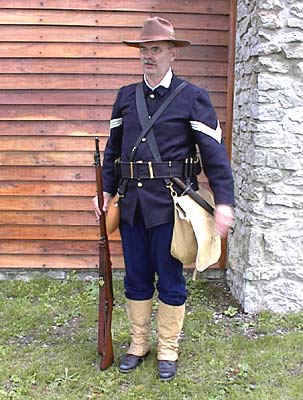