The Republic Aviation Company’s P-47 “Thunderbolt” Fighter Plane was produced in 1942. It was envisioned as a high-altitude air-to air Fighter. Over 15,000 of this Class of Fighter was produced for The US and British Military for use during World War II. Pilots affectionately named her “The Jug” due to her resemblance to the container type. The “Thunderbolt” was also one of the first Fighters to feature both a “bullet-proof” Canopy, as well as an electrically activated jettisoned Canopy (which aided in the survivability of The Pilot. In Europe, The “Thunderbolt” was a primary Fighter used to pursue German V-1 and V-2 Rockets. Their maneuverability allowed them to engage and destroy these Missiles. Although a few were deployed to The Pacific Theater, The P-47 was a principle European War Fighter. Crewed by 1, The P-47 was 35-feet long with a 41-foot wingspan. They were powered by a single Pratt & Whitney Radial Engine, capable of 2,600-HP. Rated at 430-mph, The “Thunderbolt” could achieve an operational ceiling of 43,000-feet.

Her primary armament was (8) .50 Caliber Wing mounted Machine Guns. She could support 2,500-pounds of Bombs, as well as the ability to deploy (10) 5-Inch Rockets for Air to Ground Missions. It is in this function that The “Thunderbolt” became somewhat well known. Although a High Altitude Fighter, they were also used in low-altitude, quick bombing deployments (against German Armor and Infantry Formations), hence their nickname “The Thunderbolt”. Although by 1945, no further P-47’s were manufactured, it’s name would continue own with the very similar Fighter, the Modern A-10 “Thunderbolt” Low-Altitude Fighter (or The “Tank Buster”). 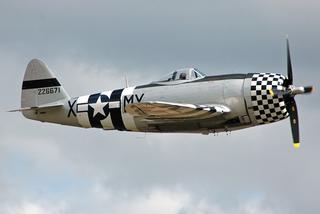