Also known as ''The Workhorse'' and ''Flying Banana'', The Pisasecki H-21 was a Tandem (multi-rotor) Helicopter, developed for The US Army in 1952. Initially, The ''Shawnee'' was designed to withdstand severe arctic cold (for deployment) and could withstand temperature variances of sub-zero. Models were also deployed with The US Navy for Carrier Based rescue operations in cold weather as well. Exported to The French Army, The H-21 was first used in combat during The Algerian War (1956). The Model was modified to support on-board Machine Gun mounts and Rocket Pods. Prior to full deployment of The Bell Helicopter UH1 (''Huey''), The H-21 was the dominate Helo used (as early as 1962 for Special Forces and later by The South Vietnamese Army. By 1965, most ''Shawnee'' Tandems were decommissioned.

Crewed by 3 to 5, The H-21 was 53-feet long. Each Rotor diameter (radius) measured 45-feet. Height for The H-21 was 16-feet. They could support a troop complement or 25 (or transport 25 wounded via stretchers). Power was supplied by a single Wright R-1820 Radial Engine, capable of producing 1,435-HP for both rotor plants. Air speed was rated at 127-mph. The Model could range 265-miles with an operational ceiling of 9,500-feet. Armament varied depending on Country use, but US Army versions in the early Vietnam War – were supported by (2) .50 Caliber Machine Guns. Towards the end of their Service, these were replaced with M60 (Airborne Mounted), 7.62mm Machine Guns. 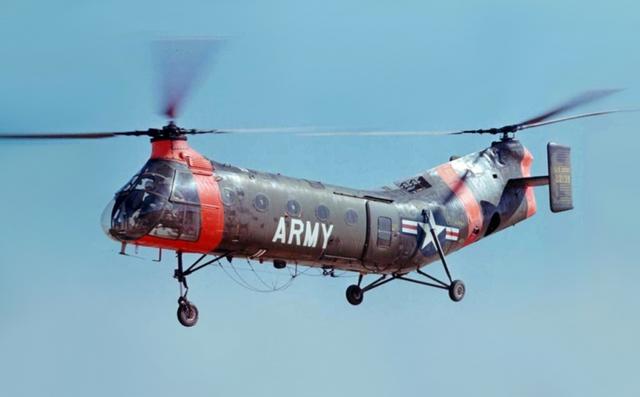