The North American Aviation Companies “Savage” was a Medium Range Bomber, designed to accommodate Nuclear weapons, such as The “Far Man” Device used against The Japanese City of Nagasaki in 1945. Capable of supporting a 10,000-pound Atomic Bomb, The “Savage” could also support 12,000-pounds of conventional bombs. The aircraft soon became one of the “heaviest” of it’s kind in The World. Also used as a Reconnaissance and later Air Refueler, The “Savage” first flew in 1948, although initial deployment with The US Naval was not until 1950. The “Savage” was deployed  (3 of such) in Korea during The 1950-53 War, as a deterrent weapon to Communist Forces. 140 were built.

The AJ “Savage” was a 3 Seater, which was 60-feet long with a wingspan of 72-feet. She could achieve 40-mph and range up to 1,700-miles. Her Operational ceiling was 40,000-feet. The “Savage” was not a true Jet Engine in terms conventional sense. She was powered by Twin Turbo Property Pratt & Whitney Engines. At the rear fusilage, a Allis on J33 Ram Jet was included. This “air breather” had a 4,600-poind thrust. This feature was used just prior to both target acquisition and departure from initial drop.

The “Savage” had no secondary defensive armament, where her Mission was on of strict tactical Nuclear deployment. The “Savage” was also on of the first Carrier-Based Nuclear Strike aircraft developed. Her overall weight precluded her from deployment to only “Forrestal”-Class Carriers. Only 3 Nuclear variants were created, with over 6 with the Reconnaissance Class. Bomber development was at a fever pitch due to the start of The Cold War, and The “Savage” was discontinued for service by 1955. 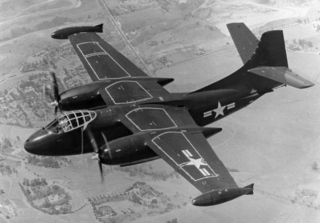