A Mainstay component of the Nike Continental Defense Deployment Missile System, The “Hercules” was a Surface To Air Rocket that was fixed launched. Used as a “Coastal” and City Defense weapon, The Nim-14 was armed with TheW-31 Nuclear Warhead. Fusion-based, the Missile could launch a 2 to 40-Kiloton yield. It was seen as a Medium to High-altitude Enemy Bomber eradicator. The “Hercules” was also deployed with NATO in much the same way as they were in The United States. Weighing close to 10,000-pounds and 42-feet long, The Nim-14 was attached to a 28-foot solid Fuel Stage. The M42 Booster allowed for 10,000-pounds of thrust and an operational range of 900-miles. 12-foot stabilization wings (in-flight) were matched with 7-foot detachable in-flight stabilizer Stage fins as well. The Operational ceiling of The “Hercules” was rated at 150,000-feet. It could achieve Mach-03. Computerized Guidance controlled from Ground Systems gave it a better that 75% accuracy ratio.

With the development of the previously mentioned Nike Defense System for The Continental US (specifically), The NIM-14 was logical choice. Robust and reliable, it became the largest “secret” deployed Nuclear Defense asset before the advent of The “Minuteman” ICBM System of the 1960s and beyond. Mobile variants were attempted, but deployment time was almost tripled. Normally, from targeting to fatal contact, a 20-minute time was required. Mobile set-ups increased this to 40-minutes. Most Mobile attempts were confined to Europe. Other attempts to construct a Bomber Mounted (and smaller version) was also attempted, but only in prototype.

The typical “Hercules” deployment Base featured a Battery of 6 to 8 Rockets which were in hydro lifts designed for quick movement from 10-feet underground to ground level firing position. Radar acquisition “Balls” quickly identified an Enemy Target. From their accurate tracking moved The NIM-14 Rocket to target – and elimination. By the mid 1960s, “Chase” Rocketry was created. The “Corporal” was a smaller Rocket that was fired along with The “Hercules”, Radar “attached”, they were used to distract and destroy any possible Enemy attempts to destroy The NIM-14 in air. As Chaffe Rockets, The “Corporals” were very effective “Hercules” protective devices. By 1988, the last American “Hercules” Battery was finally deactivated. During their deployment, over 25,000 NIM-14 “Hercules” were built. None were ever fired in actual Combat. 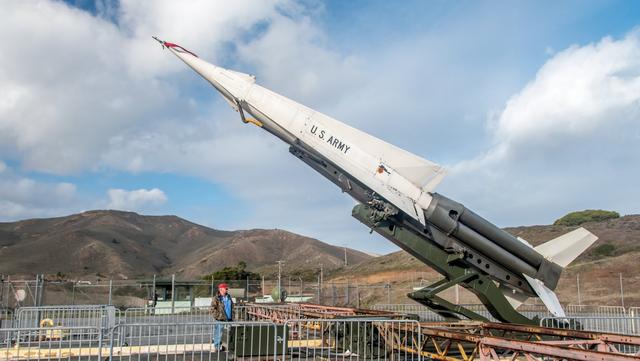