As we have seen, The United States Army of the 19th Century, underwent a series of “Hat” evolutions. The Shako, Hardee and Kepi – to name a few. Likewise, a similar development was seen in The “Bummer” and “Slouch”. Cavalrymen often derived their own headgear, based on durability and comfort. The Army did not make an issue over this practice  (it saved them money). Straw Hats and other Civilian type Hats (similar to The Civil War "Slouch"), were popular. The Stetson Company was interacted in the 1870s to produce a Regulations Hat for Cavalrymen use. A finalized version was deployed in 1875 known as the “Campaign Hat”. Made of Black heavy felt, it’s Crown was slightly smaller than a non-traditional Military Hat.

Issued at the unofficial “start” of the so-called “Plains Indian War” The Model 1875 featured a simple “Acorn” Hat Cord. These were often on Yellow color  (denoting The Cavalry). Unlike “Hollywood” portrayal, most Campaign Hats did not feature Hat Brass or related identifiers. For the most part, these Hats held up to the rigors of “Plains Life”. Some however, suffered as a result of exposure to rain and heat and poor care. The Model 1875 would be seen well into the 1890s (either variants on Black, Bone, Tan and Gray). 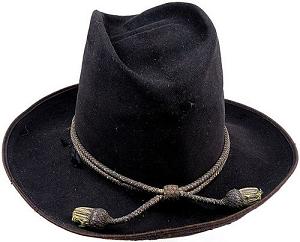