Based on The Order of Military Merit, created by General George Washington in 1782 – this award was given to Continental Soldiers for “Heroism” in Battle during The Revolutionary War. After The War, The Award ceased to be issued. Other than The Medal of Honor (created during The American Civil War), The American Military did not have any Awards or Medals. These were seen as symbolic of European “trappings” that The United States had fought to remove themselves from.

Changes in time and protocols showed that some form of Award needed to recognize Soldiers, Sailors and Marines who distinguished themselves so in Combat – that they most often were wounded (and or killed). The circumstances of their Award needed to less that those required for The Medal of Honor.

The “Purple Heart” Medal was originally created in 1917 (although it would not be officially recognized by The US Congress until 1932). The Medal is Purple in overall coloring, trimmed in White. The actual Medal portion is Heart (from traditional Medieval Heraldry versions) Shaped, trimmed in Gold. The Center of which is enameled Purple. Centered in The Heart is the Profile relief of George Washington (in Gold).

Still awarded today, the criteria for issuance is for any US Military Service Person who is wounded by direct (or indirect) Enemy fire, which results in a physical injury (regardless of severity). The Award is given to both those who survive their wound as well as those who die before official issuance. To date, over 1 Million Purple Heart Medals have been awarded since WWI. Although rare, it has been awarded to Foreign Soldiers attached to US Forces, if they are wounded in Combat while doing so.

The record for the highest number of Purple Hearts awarded to one Soldier was (10) during The Vietnam War. Additionally, US Army JROTC (Military School Cadets), can also be awarded a version of The Purple Heart (which looks very similar) to The Combat version. This is awarded for exceptional Military Service and is normally given after one had completed all 4 years of School Training. 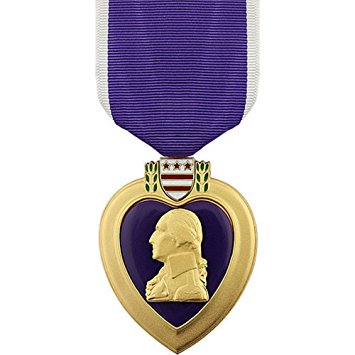