The Medal is a circular device of Bronze color. The Front of The Medal features a typical Korean Temple Archway, with the inscription ''KOREAN SERVICE'' inscribed . The Reserve of The Medal bears The Taegeuk (or multi-colored National Symbol which appears on The South Korean national Flag). The inscription ''UNITED STATES OF AMERICA'' is present. It was common for some Soldiers to inscribed their Service dates onto the Reserve of The Medal (by Civilian Contract). The Ribbon portion of The Korean Service Medal is a Light Blue Field, with a Vertical White Stripe. This was in honor of The Flag of The United Nations Coalition of Forces who fought in The Korean War (1950-1953). 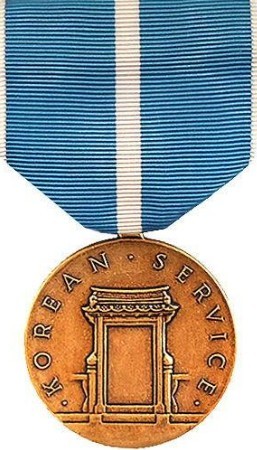