The US M-22 ''Locust'' Light Tank was designed in 1942 for use by Airborne Forces (in particular Gliders). The small Light Tank was seen as an effective weapon for The Glider Operations that were bound to commence with American involvement in World War II. The ''Locust'' was prototyped and initially approved of The The US War Department. However, by 1943, The M-22 was seen by some as obsolete. Despite this, The ''Locust'' was seen as a possible effective weapon for Infantry Support use. Over 800 Models were produced with 260 sent to Great Britain. In British Service, The ''Locust'' did not perform well. It's Armor was too thin to withstand typical German Field Guns. Britain discontinued The M-22 in 1946, selling most to Egypt. The Light Tank featured in The Arab-Israeli War of 1948. 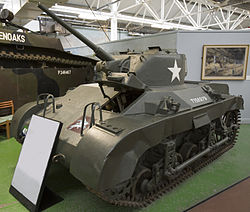