First designed by The Lockheed-Martin Aircraft Company in 1954, the aptly named “Hercules”, quickly became the “Workhorse” of American’s Military as the primary Troop and Cargo Carrier. Seen as the next evolutionary step in Military Transport, The C-130 replaced the World War II Era “Flying Boxcar” -The Fairchild C-119. The Douglas C-47 “Skytrain” and The Curtis C-46 “Commando”. From 1944 to The Korean War of 1950-53, a basic problem with landing Transport Planes was the need for pre-prepared Landing Strips which required adequate take-off and landing space. The “Hercules” fixed this by designing a higher and faster lift ability. As such smaller and often hastily prepared Landing Strips could be used more effectively, only 3,800-feet was required.

The C-130 was crewed by 5. It was 97-feet long with a Wingspan of 133-feet. The C-130 could transport up to 45,000-pounds, when converted into a Cargo (Freight) Aircraft. The Planes could also transport a Company of Airborne (Paratroopers) – listed as 64. This allowed several C-130s the ability to serve as platforms for larger and more precise Airborne Operations. Powered by (4) massive Allison T56 Turboprop Engines, each Propeller had a 13-feet diameter. The C-130 had a maximum airspeed of 366-mph with an Operational Ceiling of 33,000-feet. They could range up to 3,000-miles on a standard Mission.

The “Hercules” became the standard for Military Transport throughout Southeast Asia during The Vietnam War. The US Army, Air Force and Navy all used variations for their in-Country Operations. Traditionally, C-130 were not Armed, but did carry different arrays of Flare Distribution Packages, which in turn could be used by both Ground and Air Forces for night time Missions. Since their use in Vietnam, The C-130 has become one of the most exported Service Aircraft in The World. Most Countries maintain several for their Military. There are over 20 variations designed, with many used for Coast Guard and even Fire Fighting Operations. 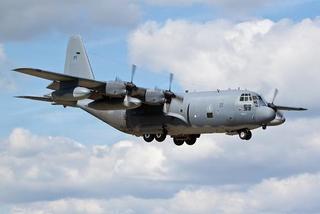