US Legion of Merit

Created in 1942, The US Legion of Merit is a high-ranking award given mostly to Senior US Armed Forces Officers, Diplomats and certain Foreign Dignitaries who have provided some ''exceptional service'' towards The United States. To some, The Legion of Merit was seen as a ''Retirement Award'' given to General Officers for their ''many years'' of service. In some cases, Senior NCO were also awarded The Legion of Merit. It is rarely given to Enlisted Personnel.

The Device is also the second such Award to be presented as a Neck attached Ribbon (the first being The Congressional Medal of Honor). The Ribbon is Dark Red in Color and bordered with small White Stripes on either side of the perimeter.

The actual Medal is enameled with a White Maltese Cross, trimmed in Red. The Center of The Cross is a Gold and Blue circle into which is placed (13) White Stars (also arranged into the shape of a ''Star''). The larger Cross is set over a Gold backing which is trimmed in Emerald Green. 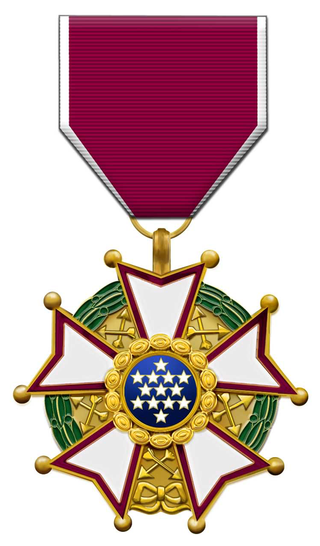