With the advent of viable automobiles, it took very little time before even these machines were designed for War. The First World War gave most Countries the ability to built somewhat cheap and yet very effective armored vehicles, without the need to construct the more heavy  (and expensive), full sized Tanks. The United States experiment with many armored car designs (even before it was actively involved in The War). Many Motor Companies vied for Government contracts (and monies), to create the most "reliable". Many of America's armored cars were "Battle Tested" on The US-Mexican Border along Texas. Incursions from Mexican Bandits were common enough to almost start a Second American-Mexican War. These "new" armored cars were ideal for this task. The King Motor Company of Detroit, Michigan put their "hat into The Ring", in 1917 - when they were awarded a contract to construct a "light, all-purpose armored car" - for possible deployment to Europe (now with The US involvement).

Based in part on the British Royal Naval Services Armored Command Car, The King Car first rolled out in 1917. Featuring 1/2 inch Armor plating, The King used an 8 cylinder engine and weighed 2 1/2 tons. The King used 4 reinforced, vulcanized rubber tires. Considered small, it held 3 men. Capable of mounting a Lewis .30 cal. Machine Gun, The King could travel at 20 mph on roads and 18 mph on the battlefield. A small amount of King's were deployed to Europe in the waning months of World War One. After The War, The King was used briefly along The Mexican- US Border as a Command and Communication vehicle. Models were built for both The Army and The US Marines. Some found their way into many State National Guard Armories, being more or less discontinued by the mid-1930s. 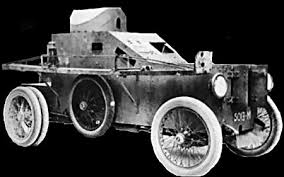