The Grumman E-1'' Tracer'' was the first deployed Airborne Early Warning aircraft fielded by The US Military in 1956. It's purpose was to monitor and relay intelligence on potential Enemy Missile and Aircraft tracking. They carried some of the most (then) advanced Radar Avionics equipment developed. During The Vietnam War, ''Tracer'' Aircraft served to monitor MIG (Fighter) activity over North Vietnam, and served to direct anti- Surface to Air Missile (SAM) Strikes. Deployed from either land-based or Carrier-borne platforms, The E-1 would serve in US inventory until 1977. The E-1 was crewed by (4). They were 45-feet long with a retractable wingspan system (for Carrier deployment). Extended, these were 75-feet. The 35-foot (width) Hazeltine AN/APS Radar ''Dome'' provided for electronic surveillance equipment.

Powered by Twin Wright R1820 ''Cyclone'' 9-cylinder Radial Engines, they could produce 1,525-HP each. The rated airspeed was 238-mph. Operational Mission range was over 1,000-miles with an operational ceiling of 16,000-feet. No Offensive/Defensive weapons were deployed with The E-1 ''Tracer''. 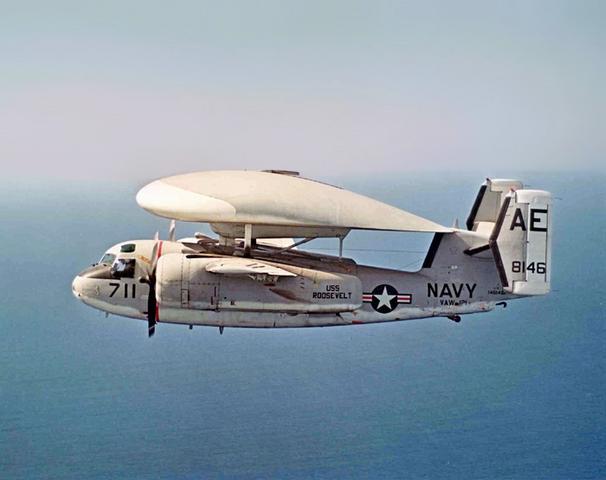