The ''G''-Class of non-rigid Airships (Blimp), was used by The United States Navy – beginning in 1935. Produced by The Goodyear Company, The ''G''-Class was marketed as a ''Civilian'' passenger vessel, but became one of the most popular used by The Navy during World War II. The Class was used in support of Vessels as Sea (supply) and for Training. (10) such ''G''-Class Blimps were commissioned and served in The War (mostly in The Atlantic Ocean, in support of Allied Convoy Missions). The Class was last used in 1944. Crewed by (3), The ''G''-Class could transport as many as (8) additional persons. Measured as 187-feet long, they were 60-feet in Height with a 44-foot diameter. Power was provided from (2) Continental 210-HP Radial Engines. Rated airspeed was 53-mph and The Class could remain in-flight for as long as 17-Hrs. The ''G''-Class was not armed and known were lost to combat activities. 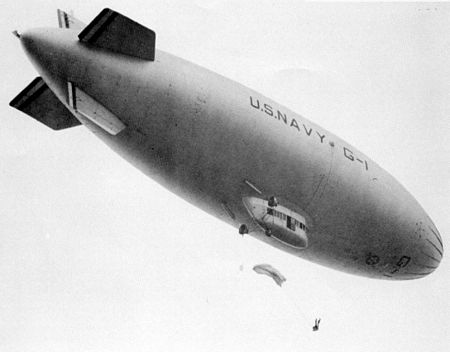