A late World War II Cargo and Transport Plane, The Fairchild C-82 ''Packet'' was first introduced into The US Military Inventory in 1944. Over 200 Models were produced. Used for transporting of heavy cargo, The ''Packet'' was very much as it's Seaborn namesake The ''Packet'' Ship. In addition to cargo, The C-82 could be used for Medical Evacuation, Troop Transport and Airborne Deployment Operations.

The C-82 was instrumental after The War in delivering much needed supplied and equipment to The City of Berlin, Germany – during The 1948 Blockade by Soviet Russia. Retired by the 1960s, most were sold to Commercial Service within The US and several Foreign Nations.

The C-82 was crewed by (3). They were 77-feet long with a wingspan of 106-feet. Power was provided by Twin Pratt and Whitney Radial Engines, each capable of producing 1,567-HP. Operational range was rated at nearly 4,000-miles with a ceiling of 22,000-feet. Airspeed was rated at 250-mph. They carried no offensive/defensive armament. 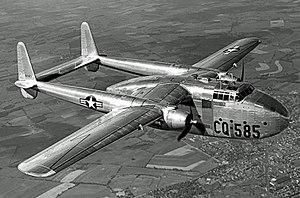