Introduced by The US Military in 1951, The Douglas Aircraft F-3 ''Skyknight'' is a 1st Generation Fighter Jet Aircraft, which was one of dozens of design prototypes designed and introduced by The United States. Most World Power Nations during The ''Jet Age'' of the 1950s thru early 1960s. The ''Skyknight'' Fighter was purposed for use by The US Navy and Marine Corps. Only 270 Production Models were built, with most surviving well into the early 1970s. A ''stout'' looking Fighter, Pilots nicknamed it ''Willie The Whale''. It was a predominately Aircraft Carrier based asset. A common issue with The F-3 was that it had sluggish handling, which made it somewhat vulnerable to FOD (Foreign Object Damage) impacts. Class as a ''Night Fighter'', over (15) variants of The F-3 were produced. Crewed by (2), The ''Skyknight'' was 45-feet long with a wingspan of 50-feet (non-swept). The F-3 was powered by Twin Westinghouse J34 Turbojet Engines, each capable of 3,600-IBF Thrust. The Fighter was able to achieve 540-mph, ranging over 1,500 nautical miles. The operational ceiling of The F-3 was rated at 39,000-feet.

Armament deployment packages included (4) 20mm Cannon, (2) 11.75mm ''Tiny Tim'' Air to Air (un-guided) Rockets, (4) ''Sparrow'' Air to Air Rocket packages and (2) 2,000-pound ordnance devices. ''Skyknights'' were not rated for Nuclear deployment capabilities. The F-3 also featured many advanced Avionics and Navigational packages, to include electronic counter-measure devices. The ''Skyknight'; saw active service during The Korean War of (1950-1953). It has the distinction of being the only Korean War service Fighter to remain in active service during the later Vietnam War. They served in electronics monitoring Missions solely, remaining until 1969.

Many surviving examples can be readily seen through The United State at various Air and Space Museums. None are known to exist outside The Country, as most decommissioned Models were not made available for Export to Foreign Allies. 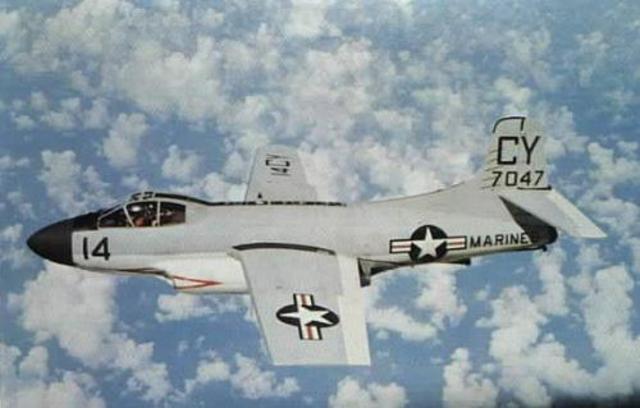