US Consolidated B24 ''Liberator'' Heavy Bomber

The B-24 Heavy Bomber (nicknamed The "Liberator" by The British), was on of the first deployed Heavy Bombers deployed to The European Theater of War. First developed in 1939, this Bomber is considered one of the most produced by America during World War II (despite it's flaws). One such issue with The "Liberator" was it's think steel frame and skin. This made it particularly vulnerable to enemy strafing. Capable of a 35,000 foot operational ceiling and a 2,100 mile range (290 mph airspeed), The B-24 was 67 feet long with a 110 foot wingspan. Crewed by 10, it was capable of carrying 12,000 pounds of munitions. The "Liberator" was armed with (8) .50 caliber Machine Guns mounted in the nose, tail and gondola Turrets. Many B-24s were used by The British, first in North Africa and The Mediterranean. They would also be deployed to The Middle East. Over 18,000 were produced until 1945 (with versions in use up until the early 1950s) 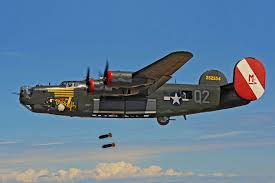