Although the theory of non-motorized combat aircraft, or Gliders - was not new at the start of World War II. Gliders were experimented with in the early 1930s by Germany, Britain and The US. At the start of The War, both The Allied and Axis Powers saw the tactical importance of these unique aircraft. With America's involvement in WW II, on of the first Gliders developed was by The Waco Aircraft Company. The CG-4A was a non-mechanical propelled plane, 48-feet long with an 85-foot wingspan. Constructed of fabric covered wood and metal, the so named "Waco", could carry 13 fully armed and equipped Soldiers. It could also serve as a "mini" Cargo transport, capable of carrying up to 7,500 pounds.

In theory, The "Waco" was towed by a larger traditional Cargo plane (as a C-47). This was accomplished by a 225 to 350 foot nylon test rated cord. Upon reaching maximum glide altitude (8,000-10,000), the tow line would be detached - allowing the craft to fly unaided. Requiring 600 to 800 feet of "take off" space, The "Waco" could achieve a Glide speed of 150 mph. Over 13,000 were produced. Large numbers were sold to Britain, who nicknamed them The "Hadrian" Glider. Because of their clandestine abilities (noiseless), large numbers were used during The Normandy Invasion of France by The Allies (1944). There were 5 variants in The US and 2 in England. 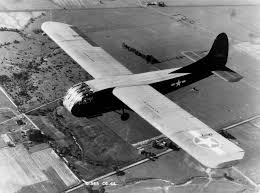