Considered by many as the “worst’’ Fighter built by The US Military during it’s involvement in World War II, The “Buccaneer” as developed by Brewster Aviation  for use by both The US Army Air Corps and Marines – with contracts ordered by The Royal Air Force and The Dutch, between 1942-and 1944. Brewster Aviation saw The ‘’Buccaneer” as an augment Fighter to The Grummann ‘’Avenger’’ Class. Poorly constructed and unreliable, The SB2A was deployed with The Royal Air Force (190 produced), and the Aircraft preformed poorly as a Fighter, but saw some service as a Trainer. Major production delays also hampered full deployment with The American Military. Only 700 were produced. The vast majority of SB2A (although delivered), never flew. 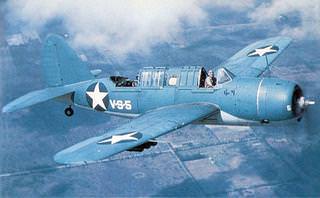