US Boeing B17 Heavy Bomber

A mainstay US Army Air Force Heavy Bomber, they were specifically used for daylight precision bombing. Dubbed The "Flying Fortress", development began in 1935, with it's first deployment in 1938. The "Fortress" was 74-feet long with a wingspan of 103-feet. Powered by 4 propeller engines, each had 1,200HP capable of a maximum airspeed of 287-mph. The operational ceiling for this Bomber was 38,000-feet. It was also able to achieve a 2,000-mile range.

The weaponry of The "Flying Fortress" was equally impressive. Dual Browning. 50 Cal. Machine Guns were positioned throughout the aircraft (numbering 12 points). These were the nose, upper fusilage Turret, Waists, under "belly" Turret and Tail. The Bomber was capable of carrying 12,000 pounds of munitions. Crewing between 10 to 12, the B-17 was a major production warplane for The European Theater. It is estimated that B-17s flew thousands of missions against Germany and dropped 1.6 Million tons of bombs. Although retired in 1945, the last Model still in Service in South America was retired in 1968. 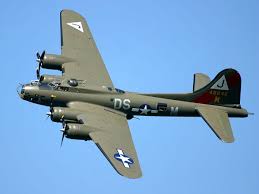