The United States was the first National in History to harness "atomic power" into a viable weapon. Destructive and controversial in deployment, the development was seen as a necessity to end World War II by defeating The Imperial Japanese. The United States developed and constructed two Atomic weapons, both of which where deployed. The result was indeed an end to World War II, and the beginning of "The Atomic Age".

BACKGROUND:
German Scientists were the first to discover what would be termed as "atomic fission" in 1938. The process of isothermal energy released  (light and heat), if harnessed properly and using hundreds of like split atomic particles, would (or could in theory), release an untold explosive force, many times more powerful that any conventional explosives. With the discovery, German Dictator Adolf Hitler demanded experimentation to create such a "super weapon" - delivered as a bomb or related ordnance. American and British Scientists too were working on a similar "atom splitting" process. By 1942, well into America's first year of World War II, a top secret program was created called "The Manhattan Project". So ultra secret, it was spread over 30 States. By 1944, an all out effort to suppress German experimentation through constant Bombing raids was initiated. It worked. Germany surrendered in April of 1945 and threat of their developing a fission device ended. America created the first Uranium and Plutonium devices after several actual explosive detonation tests. The first devices were ready, but would they be deployed?

OPERATION: OLYMPIC:
With Germany's surrender, America and The Allies turned to The Empire of Japan. Severely beaten back to it's Mainland at the cost of thousands of casualties from invading the many islands under Japanese control. Still, Japan was defiant in it's stance. It would not broach any invasion of its Homeland. But this was the general concensus with the American Military Command. An Army of 1 Million would be needed for The Invasion of Japan. The casualties were destined to be in the hundreds of thousands (at best). The War in The Pacific would drag on, perhaps to 1950. It was decided. Use the devices.

LITTLE BOY:
The first Atomic weapon to be deployed was code named: "Little Boy" (for it's slender design). This was a Gun-Trigger Device (the simplest method of detonation). Using Uranium in two masses, a charge carried the one mass into the other. Within 1/15th thousand of a micro second, critical mass and detonation would be achieved. "Little Boy" weighed 9,700 pounds and had the Destructive force of 20,000 tons of TNT. It was fitted with 137.5 pounds of Uranium. The bomb was 31.5 inches in diameter. It would be delivered by a B-29 Super Fortress Bomber named "The Enola Gae" airbrust some 800 feet over the City of Hiroshina - August 6, 1945. The resulting explosion completely destroyed 5-square miles of the City with winds up to 500 mph and a resulting fireball estimated at 5,000 degrees Fahrenheit. 100,000 were killed outright with 40,000 severely wounded. An estimated 25,000 more would die over the next 10 years of radiation related symptoms.

FAT MAN:
Still unconvinced that America could make good on it's threat to "unleash a devastating force on Japan", no surrender was forthcoming. So again, on August 9, 1945 another Bomber "The Boxcar" was deployed with another device, code named: "Fat Man". This device utilized Plutonium initiated in a "Motion Trigger" fashion. A shaped charge detonated (known as an Explosive Lens) or Implosion Compression Method, against the Plutonium, causing a chemical reaction, and this initiated fission. Weighing 10,300 pounds, "Fat Man" was 128 inches long and was 60 inches in diameter. It's Plutonium core was 14-pounds. "Fat Man" was detonated over the City of Nagasaki at 1,650 feet. 7 square miles were destroyed by winds in excess of 650 mph with a 4,700 degree fireball. Over 40,000 were killed outright with 100,000 radiation related casualties.

CONCLUSION:
The final bomb forced Japan into ultimate, unconditional surrender. It also brought to an end to World War II. It also created a new Era of nuclear arms race and an ensuing Cold War. 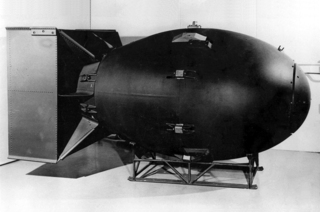 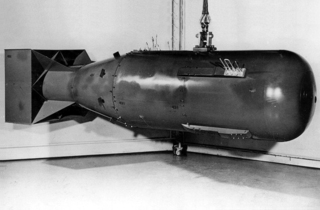