Known by their iconic nickname The “Green Berets” (the distinctive Dark Green Beret worn by qualified Members), this specialized Infantry Unit of The US Army was truly on of the first “Cold War” Commands developed to fight in Unconventional Warfare (seen as the “future” of Modern Combat in the mid-20th Century). Authorized by then US President John Kennedy, the first operational Special Forces Unit was created prior to his Administration in 1952.

The Special Forces lineage was born from several World War II Organizations which were in turn based on the famed British Commando Regiments. The Special Forces are a highly trained Offensive/Defensive Combat Unit, in which each Soldier is cross trained in several Military Occupational Specialties. All speak more than one language and most are highly educated in a variety of Civilian educational disciplines. Traditionally, Special Forces are culled from The US Army Infantry, with all Members having more than one Special Operational Training background – such as Sapper, Ranger and Airborne (Parachutist) training.

During The Vietnam War, Special Forces Units would operate deep behind Enemy Lines, often working closely with Native Tribes, turning them into effective Combat Scouts and Attack Units. Special Forces used some of the most advanced equipment in the Field.

There are currently (7) Operational Divisions in The US Army (both Active and Reserve) – deployed throughout The United States and Overseas. Training is extremely mentally and physically demanding and lasts between 55 and 95 Weeks with a very high attrition rates. It is broken down into (3) Phases that encompass all types of terrains, battlefield conditions and known tactics and scenarios. Today, The Global War on Terrorism has increased training related to this unusual form of “Modern” Combat.

Special Forces wear the iconic “Green Beret” which for almost 50 years was the ultimate sign of an Elite Combat Soldier not only within The Army – but The World. The Beret was picked as the headwear of Special Forces in honor of The Green Beret worn by Great Britain’s comparable Commando’s. Their Unit Patch is a Green Arrowhead with Fighting Knife (in Gold). A series of Lighting Bolts are placed over this device. Above The Arrowhead, a Black Tab Patch with the wording (Gold) “Airborne” is placed. Since the 1980s an additional Tab was added (Green and Gold) with the wording “Special Forces”. Even if a Special Forces Soldier leaves The Green Berets for another assignment, he is allowed to wear his “Special Forces” Tab for the remainder of his Career.

The Unit Crest (or Heraldry) is a Silver and Black Device with features a series of Arrows over a Fighting Knife. Their Motto in Latin is “De Oppresso Liber” or “Free The Oppressed”. 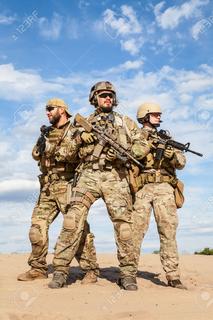