Known derisively as The “Ruptured Duck” Badge by US Army Veterans, this was a Badge worn on the Uniform of a Veteran to signify his “Honorable Discharge”. Made of gilded Brass (with a cloth version also available). The Device was roughly 3-inches in width and 2-inches in height. The Badge also solved other issues which arose with the end of The War in 1945. The possibility of Deserters (who would wear Civilian Clothes) was a problem. As such were Army regulations which governed the strict wear of Uniforms. Soldiers on leave were not allowed to wear their Uniforms (which caused confusion with regards to rooting out such). The wearing of the Badge in Uniform allowed a Soldier to continue to wear his Uniform (providing The Badge was present at all times).

Also, clothing was in extremely low levels after The War. The simple act of just buying Civilian Cloths was a chore. The Badge allowed Soldiers to wear their Issued Clothing much longer than normal as discharged Veterans. In some cases, Soldiers were still wearing them until early 1946! Later, with The Korean War of 1950-53, the wear of The “Ruptured Duck” Badge was authorized for wear to symbolize a Soldier's previous Service (with some examples even being seen in the 1965 among long-term, serving Officers or Senior Non-Commissioned Officers.The Badge was traditionally worn in both Brass and Cloth versions on or over the left Breast pocket of The Dress or Class “A” Uniform. 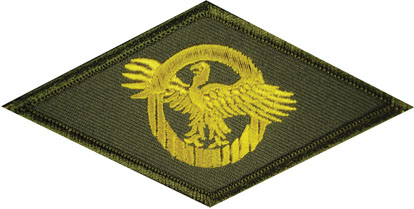