Originally created under Orders of US President Dwight Eisenhower ion 1953, The National Defense Service Medal is a current Award given to all Members of The United States Armed Forces (all Branches) and their Reserve and Guard Components. The Medal was created to recognize those Service Members (regardless of Rank or length of Service) – who were in Active Military Service during a declared National Emergency. Combat is not seen as a requirement for issuance. The Medal and Ribbon is the oldest ''Achievement'' Medal currently issued in The US Military since it's inception during The Korean War.

The Medal Device is circular in shape, with the Front showing a raised engraving of a Federal Eagle. Above this image, the words ''NATIONAL DEFENSE'' are placed. The Rear of the Device bears the image of The US Shield (Heraldry), and is often engraved with the name and period of Award (at the expense of The Recipient). The Ribbon is a Red Field which bears a White, Blue and Gold series of striping. Additional Awards on The Ribbon are identified by additional Gold Star Devices. 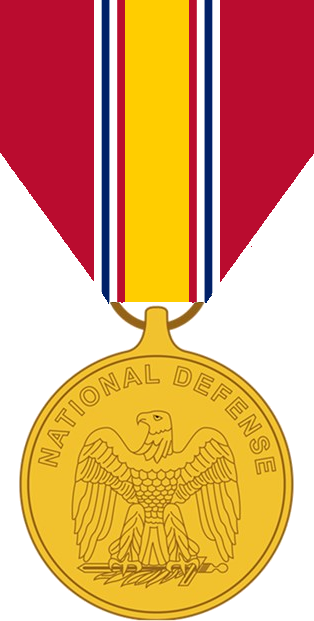