Raised in Grand Rapids, Michigan in 1862 – to fight in The American Civil War, The 6th Michigan Cavalry Regiment was part of The Michigan Brigade of Volunteers. These consisted of Infantry, Cavalry and Artillery Units. The 6th Michigan was briefly commanded by the flamboyant George A. Custer (later of Little Big Horn fame). Custer's Brother Thomas was also an Officer in The 6th. He would win (2) Medals of Honor for his heroism under fire while fighting with The Regiment. The 6th Michigan would fight in (6) major Cavalry engagements during The War, and were present at The Battle of Gettysburg (1863). They were one of the few Union Cavalry Regiments present at that battle who were armed with Spencer Repeating Rifles, which were no match for The Confederates they stood against.

By the end of The War, The Regiment had lost nearly 400 Officers and Men (of an original number of 700). They had a very high rate of casualties due to their refusal to often yield the field when prudence dictated so. Mustered out in 1865, several Troops were consolidated by The US Army and deployed to Frontier Duty (as The 6th US Cavalry). They would support The Powder River Expedition in 1876 (of which Custer's 7th Cavalry was a part).

The Regiment during The War subscribed to the regulation Federal Cavalry Uniform of Blue Shell Jacket with Kersey Blue Trousers. Trim was Yellow (Cavalry). Most maintained their French Kepi (Cap). By the time of their Frontier Service however, these were abandoned for the more comfortable Slouch Hat worn by most Plains Cavalrymen. The Regimental Guidon was unusual for a Union Cavalry Regiment, in that all Troops (Companies) carried a Crimson Red, Swallow-tail style. An embroidered image of The State Seal of Michigan was placed nearest The Hoist. Bannerolls heralded The Units name and Battle Honors. Only (1) from The Civil War is known to exist. 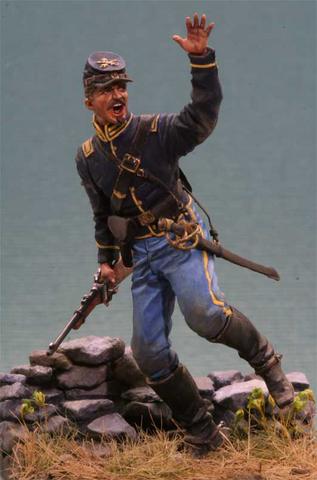