Formed within weeks of US President Lincoln's ''Call'' for 75,000 Volunteers to ''put down The Rebellion'' (American Civil War), The 15th Ohio Infantry was raised in Columbus, Ohio. The Regiment of 800 Officers and Men were one of The US Government's ''3-Month'' Enlistments. Many (on both sides of The Conflict), felt The War would last between ''1 to 3 months''. The 15th Ohio was used mostly as Train Guards for The Baltimore & Ohio Railroad. They were only involved in one minor skirmish. The Unit was marched back to Columbus and, per their Contracts ''mustered out''. However a high amount of Men wished to sign new Contract and continue fighting. 600 Men of the old ''Contract'' re-enlisted and The 15th was assigned to The Army of The Ohio.

The Regiment saw action in many of the major Western Theater Battles of The Civil War, to include – Shiloh, Stones River, Chattanooga & Chickamagua and many more. They fought with Union General William T. Sherman during his ''March to The Sea'' (Atlanta to Savannah Campaign of 1864). The Battle of Bentonville (North Carolina, 1865), was their last Civil War engagement. They helped force Confederate General Joseph Johnson anf the last Major Confederate Command into surrender in May of 1865. Of the 600 re-enlistee's in 1861, 315 of these were killed in action during The War. Two Soldiers from The Regiment would win The Congressional Medal of Honor for their actions in battle.

The Regiment wore the standard issue Union Army Infantry Uniform of Federal Blue Frock Coat and Sky Blue (Kersey) Trousers. Headgear varied between the issued Kepi Cap and a ''good slouch hat''. The Regiment carried both The National Color (Red, White and Blue, 34 Star Version), as well as Regimental Colors (Federal Eagle). The 15th, like most Union Regiments, stitched their Unit identifier into The National Colors. No surviving images exist of their Regimental Flag. 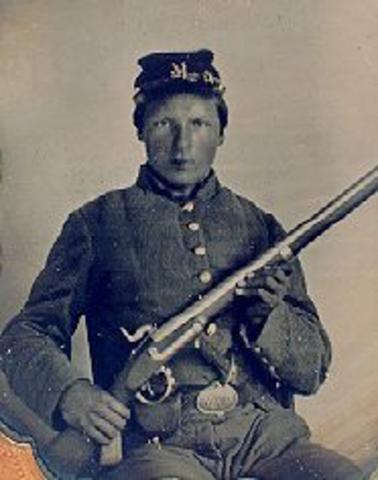