One of Britain's most "Haunted" of Medieval Castles. Built in 1071 by Norman Lords, it has become a hotbed of some famous "Spooks". In fact, even in the nearby Town of Tutbury, "Spirits" are seen (and photographed), with startling regularity. The Castle served as a Prison for Mary, Queen of Scots and a "hiding place" for Charles I. The Castle was captured by Parliamentarians Forces during the English Civil War in 1648 and slighted (destroyed). Although renovated many times, it was not rebuilt. The site of local celebrations on April 30, known as "Walpurgis Night". The ancient Druid custom, is likened to "Halloween". So popular Regionally, that the largest "Ghost Hunt" in the World is held there yearly. This brings us to 3 rather compelling "Ghost Photographs", well known in Paranormal Investigation circles. The first, involves a 1993 photo taken in the streets of Tutbury. Only a few local Residents were present. The snapshot was meant to highlight the distant ruins of The Castle. What was "developed" showed a "Hooded or Robed Figure", somewhat "gliding down the road". Another, was taken in the ruins themselves. When the Lower Bailey was enlarged, an image of a "Woman in Medieval Clothing" can clearly be seen "exiting" through a now non-existing door! Finally, in a restored room, Paranormal Investigators, using night-vision cameras and film, picked up a "Shadowy Figure" coming out of a picture hanging on the far wall. What "haunts" Tutbury Castle must like the attention, for "they" have no plans on leaving for sometime to come....IF ever! 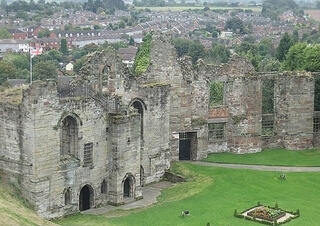