Although known to Historians as “The Lost Generation” those who fought in World War I were a Generation who still attempted to find and make “beauty” out of the “Horrors” of that War. One well known example of which is an Art Form known as “Trench Art”. Although some forms of this Art Form are the traditional drawings and crude painting made by both sides in The Conflict, another form involved the very materials of War themselves. Namely – ammunition.

Boredom from many Months in The Trenches (punctuated by the sheer terror of “The Charge”), gave rise to often talented examples of Metal Work, mostly Brass  - wrought from deactivated Shells. Small Artillery Rounds or Rifle Shell Casings were tuned into unique and priceless Art. To be sure, many of these Soldiers had prior experience in Factories and Founderys, but the “Art” became widespread as early as 1914.

In many cases, miniature Models of Aircraft, Tanks and Cannons were made as souvenirs and gifts for loved ones back home. In some cases, the subject matter was of a religious nature (Crosses, Communion Sets, etc). In many cases, hand crafted Picture Frames made from Spent Cases, were some of the most popular.

Such detail and embellishments were often included, adding a sense of realism unmatched by a Skilled Craftsman. Miniature Helmets, Firearms even Toy Soldiers were so crafted from the refuge of War. Many of these priceless pieces were inscribed with dates and names of Creators, so as to freeze (in a moment of time) the very “essence” of the futility of The War.

Many pieces did not survive into the 1940s, but those that have are considered invaluable into “seeing into” the mind of both Allied and Enemy Soldiers of that previously mentioned “Lost Generation”. 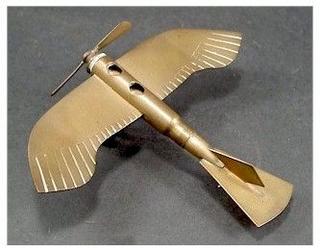