Formed and named in honor of the fallen Commander of The Alamo Mission Fort – William Travis, The ''Travis Guard'' was another Dragoon Unit of the early Republic of Texas Army (1839). They as other Militia Dragoon Units would go on yo form the backbone of the later Texas State Militia system. Largely a Ceremonial Unit, The Travis Guards wore A Dark Blue Shell Tunic with Blue Trousers. They were faced with Gold Facings and Trim. The utilized the tall Leather Dragoon-Cavalry Helmet, with Brass Front Plate and White Plume. Rank was colored an Orange-Red (the common color identifier for US Dragoons until the mid-1850s). They carried the Saber, Musket-Carbine and Side Pistols. They too would later form a Volunteer Force in service to The Confederate Army in the 1860s during The American Civil War. 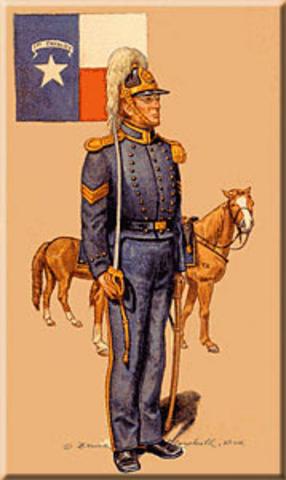