Located in Nottingham, West Yorkshire, England – Tickhill Castle formed an important part in King Johns “defenses” in this part of England. Originally a wooden Motte and Bailey wooden structure, Tickhill Castle was probably constructed around the mid-11th Century. Besieged during The Baronal Rebellions, it was later rebuilt in stone. A large 11-sided Circular Keep was built as the central defensive structure. A roughly rectangular Perimeter wall was added with Round Defensive Towers placed throughout. Tickham was garrisoned regularly (owing to the always present invasion threats of France). Besieged yet again in 1194 by Barons, it was King Richards “threat” of attack, that Tickham was spared total destruction. Again in 1321, Barons revolted against King Edward III. Supporters of which occupied Tickham Castle. Their siege was unsuccessful. During The English Civil War, Tickham was loyal to King Charles I. It was fortified against Parliamentarian assaults. However, an invasion force of 200 mounted Dragoons were able to force Tickham Castle to surrender. Under Cromwell's orders, Tickham was razed (slighted – 1648). Purchased privately, almost all of the remaining Perimeter Walls and structures not totally destroyed were removed (and stone reused) – to build a Manor Home. The original Gatehouse and partial Round Towers of the Front Gates were left intact (and still stand). Some ruined foundations and brickwork from past interior structures still exist. 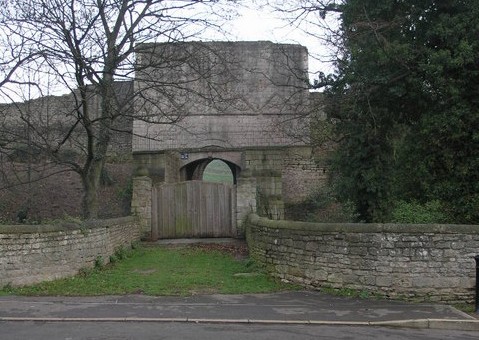