The War for Barbastro

Part of The Reconquista Period of warfare, this campaign is often cited as the first official "Crusades-type" of wars that would be a fixture in Europe and The Middle Ages for the next 500-odd years. The war was actually a siege of the Moorish city of Barbastro. Begun in 1064 A.D. - the Pope in Rome, Alexander II, had a year earlier - began preaching "holy war" against the Muslim control of the city. Many Christian leaders in Europe, heeding his call - sent small armies to his aid. These European armies, the bulk of which composed primarily of French and Burgundians (although Italo-Normans and Spanish participated as well), - landed on the coast of Spain and started their march almost immediately. After a forced march inland (with little to no resistance), they started their siege.

Relentlessly bombarding the City, the Morrish garrison fought valiantly against them. Going out in numerous cavalry sorties against the Crusaders, they were beaten back. A contingent of Frankish knights held the principle road in and out of the City. The Moors could not break their lines. The Crusaders however, had their own fears. Although the siege was effective - the Moors were not surrendering. This siege looked as if it would become more protracted that was anticipated (and there was the fear of Moorish reinforcements looming!) The Duke of Aquitaine and a force of Catalan cavalry linked up near Girona (60-odd miles from Barcelona) - and started their advance to Barbastro. Two more forced breached were enough for the Moor garrison. After a 40-day siege (and no reinforcements) - they surrendered. Barbastro was now undefended. As was the custom, the Moors were allowed to leave the City (under arms). An onslaught went into effect. The Crusaders looted and burned the City (which defeated the Pope's purpose). It was said that 50,000 men, women and children were massacred. Huge amounts of treasure and supplies were taken. The War for Barbastro would serve as a "double message" sent by Church concerning "christian ideals". This message would resonate through Muslim nations for centuries. No longer would either side show any real mercy towards their enemies. 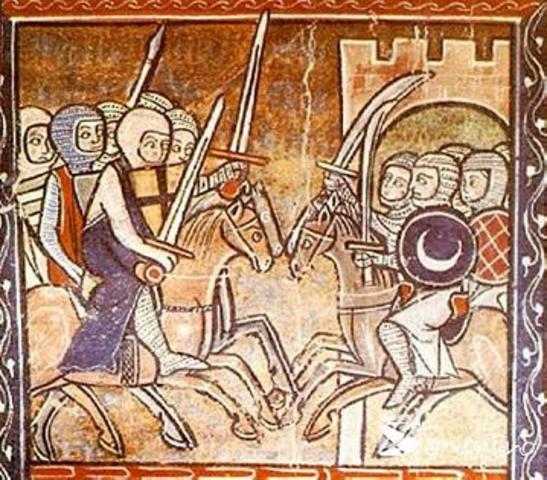