The Battle of Sluys

Part of The Hundred Years War, it was fought between France and England. This was a naval engagement between the two Nations on June 24, 1340. This battle was important to the many that will follow, in that England destroyed France's Naval resources. With a fleet to threaten England, France would make sure that landing armies on it's shores (and supplying them) would be difficult. The French at the outset of the battle, had a powerful navy. Styled after the fast attack galleys on the Mediterranean Sea (Byzantine and related), the French navy was fast and maneuverable. They could operate in shallow waters very effectively. As a result English merchants and fishing was in constant threat when the War broke out. The English did not at the time see a need for a navy. It's "fleet" consisted of a vessel known as a "Cog". These ship were the primary merchants ships for England. They large large hulled and noted for their single large mast (amidship). When hostilities broke out, the English reconditioned the Cogs. Large wooden defense "towers" were constructed on the decks. They resembled a "floating castle". Although not fast, Cogs were strong. England assembled it's fleet of around 120 odd ships. France had 180.

In The Channel, the English launched their attacks in groups of 3. 2 vessels (loaded with archers) would pass the French ships, peppering them repeatedly with arrows. The next ship would draw in close and "grapple" them along sides - boarding them, with heavily armed Men at Arms. This tactic was repeated over and over again by the English - with great success. The battle lasted well into the night. The French could not counter (nor replace) their losses. The fleet was broken. Only claiming 2 Cogs, it was said the water was the color red (from the blood) and hundreds of corpses floated in the sea - washing up on both French and English shores! The French would rebuild their fleet, but it would never gain pose the threat it did prior to the Battle of Sluys. This engagement ensured the rest of the war would be fought on the fields of France! 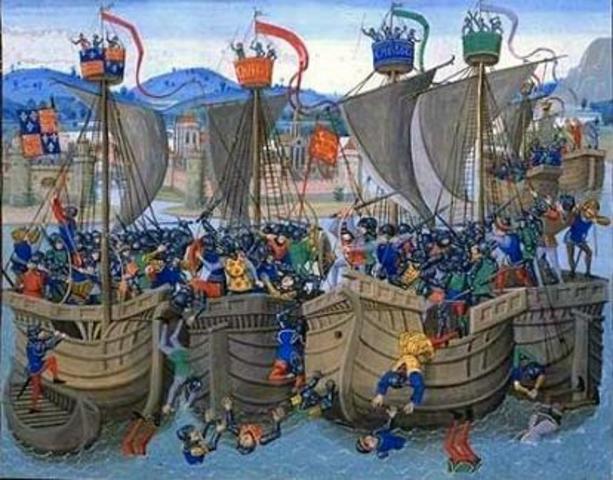