The principle of submersible Vessels that could go beneath water and operate in such conditions was not a “new” theory in the 18th Century. Since the days of Leonardo DaVinci, the idea of such Craft were speculated. However, it was in 1775 that American Inventor David Bushnell developed what is considered the first practical “submersible” used in actual Combat operations.

It was in the early years of an undeclared Revolutionary War against Great Britain that Bushnell came up with the idea of creating an enclosed and buoyant floating “Dome” which could be placed in the water and fully operated by turn screw for primitive propulsion. Using a design pattern similar to the way barrels were constructed, Bushnell had a wooden framed exterior fashioned and held together by wrought iron hoopings. The interiors was pitched with tar (which when dried), created a relative leakage proofed component. Measuring 10-feet long and 3-feet wide, the exterior of the submersible could barely fit a grown human Male. Propelled by a system of hand cranks which created a form of “forward motion”, via a small brass propeller, buoyancy was accomplished by a cache of lead ingots which could be “dumped” via an opening, directly into the water from inside the craft. Natural air pressure inside the Craft created the additional needed pressure. A glass viewing port was installed and sealed against leakage, which provided for viewing.

Named The “Turtle” more for it’s manner relative to the Reptile than it’s general appearance (some say it was more closer appearance to a “Clam”), Bushnell was (as it’s Inventor), the first to deploy “Turtle” in combat against an Enemy. Bushnell also created the first working form of timed explosive (waterproof), from which such Device could be attached to the under Hull of a Ship. Once placed, the “Torpedo” was placed and would explode at a predetermined time.

It took great physical stamina to maintain motion and adequate depth. Often (during tests), Bushnell would emerge completely exhausted from the sheer energy it took to operate “Turtle”. Nonetheless, in 1776 a month after The Colonies declared their independence, Bushnell launched his “Submarine” in New York Harbor in the late night hours of September 6th. It's target was The British Warship HMS “Eagle”. Placing his explosive device, Bushnell claimed that the Warship was sunk by the resulting explosion.

History has always debated The American version of the attack. Britain claimed that no such explosion occurred, and that “Eagle” simply withdrew from New York Harbor if fear of known floating Mines, crudely placed by Colonial Forces. Perhaps this is true, perhaps the fact that such a primitive yet innovative device could actually sink a ship of the vaunted British Navy was too much for Imperial ego. The exact “truth” will never be really known.

What happened to The “Turtle” is unknown. Despite the moving of “Eagle” and several other Warships from New York Harbor, The City itself still fell into British hands. Some cite that the innovative “Turtle” was scuttled to prevent capture. No evidence of her wreck was ever recovered. However, Bushnell’s design plans did survive, with exacting Replicas having been constructed (and proved to have worked rather well). 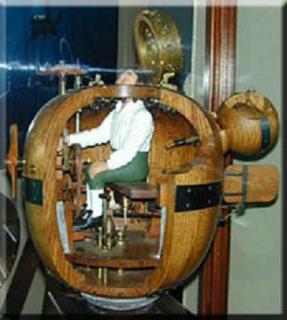