The Sword of General TJ Jackson

Probably one of the most effective Infantry Officers of The American Civil War, General Jackson's famous "Foot Cavalry" (so named for the speed in which he moved his forces), as well as his tactics - were studied by the likes of General George Patton and Field Marshal Irwin Rommel. He earned the nickname "Stonewall", at The Battle of Bull Run (1861). Standing up in the midst of shot and shell to rally his men, another Officer said "Look, there stands Jackson like a stonewall, let us rally 'round The Virginians". This action did indeed rally the Virginia Infantry (and others to winning the first battle of The Civil War, as a Southern victory). A devout Christian (to a point of zealot), he carried a bible into battle and refused to fight on Sundays. He was an Artillery Instructor at The Virginia Military Institute (The South's West Point). An avid self-"Scout" of his own positions, he was mistaken for an enemy horseman and shot by his own men in 1863. A humble man, his sword reflects this. His was a Model 1850 Infantry Officers Sword. It is 39-inches long and is single-edged. It also featured a semi-ornate basket hilt that flanged down into a "D" guard. Made in Piladelphia, Pennsylvania - it is currently on display at The Museum of The Confederacy, Richmond, Virginia. 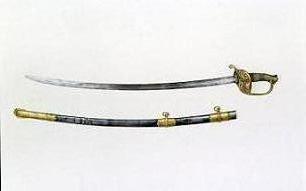