The Siege of Khartoum

With The Egyptian defeat at El Obeid in 1883 at the hands of The Mahdist Forces – it was feared that in time all of Egypt would fall under control of these fanatical followers of The Mahdi. Self-professed as being the “reincarnation” of Mohammad – he raised an Army of 50,000. Great Britain was in control of much of Egypt. But the cost (and Home approval) needed in raising yet “another” Colonial Expedition was cost prohibitive and unpopular. England tapped the resources of Major-General Charles Gordon. An Engineering Officer, he had earned the nickname of “Chinese” Gordon for his exploits in China in the 1860s.

A devout Christian, he had been sent to The Sudan in the 1870s (having served in various positions representing The British Government, and was well known in the Region). Sent under “secret” orders to take over as Military Governor of Khartoum (a major Sudanese City on The Nile), Gordon was to select trusted junior Officers and built up a Garrison to defend Khartoum again Te Mahdist Movement. Assured that British soldiers and resources were forthcoming, Gordon raised and trained a Garrison of 7,000 Native soldiers. Khartoum was protected on 2-sides by The Nile with Southern Fortifications built to protect approaches from that portion. City walls were reinforced.

Food and supplies (for the inhabitants and Garrisons were gathered over a 6-month period). However, growing resentment over “foreign wars”, prompted England to recall Gordon (before he got into a fight with The Mahdists). Refusing to leave, Great Britain sent 2 Columns of an Expeditionary Force to “get Gordon”. One Column traveled by boat (The Nile) with the other marched overland. Bother Columns were attacked by Mahdist Forces (and both incredibly survived). They could not however make it through to Khartoum (or Gordon). The same was not said of Khartoum.

The Mahdist Forces encircled the City on March 13 1884. Wave after wave of their Forces hit the City walls (often using gunpowder filled ceramic pots, primed by a fuse). These “hand grenades” would eventually open holes in the City's defenses. Finally breaching Khartoum on January 26, 1885 (after a year long Seige), the final defense of The City was with the few Artillery pieces available. Blasting wide holes in The Mahdist Forces, they still advanced. All 10 of Gordon's Staff would fall. Gordon on the other hand – went into legend.

Said to have made it back to his Headquarters in the center of Khartoum, he was said to have waited for The Mahdist Forces at the top steps to his Offices, pistol in hand (only to be stabbed through by a Mahdist Spear). Others claim, Gordon was hacked to death trying to escape to the other side of The City. Either “legend” ended in the same way. The Madhist Forces cut off Gordon's head and placed it on a spear – parading it through the streets!.

The engagement still had the intended action that Gordon wished. When word of the Siege of Khartoum reach England (and Gordon's death) – Great Britain came “alive”. With revenge of it's mind, thousands of soldiers would be recruited into the coming Sudanese War (with would drag on for 13 years).u 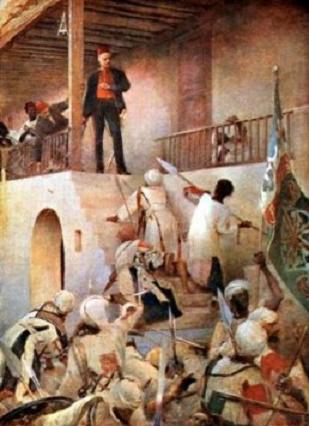