The Siege of Jerusalem

The climax of The First Crusades, the Siege of Jerusalem occurred from June 7 to July 15, 1099. Crusader forces under Raymond of Toulouse (and multiple allied Kingdoms), numbering around 14,000 - defeated the Fatimid Caliphate forces of Al Dawla (roughly 12,500). The Crusader forces arrived at Jerusalem on June 7. After many months of forced marches, the Crusaders were low on supplies and water. Jerusalem was well prepared for a siege. The Crusader armies attempted multiple attacks against it's walls - without success. Finding no nearby wood to build siege engines (the Fatimid forces had burnt or cut down all nearby sources). The Crusaders had to travel to Samaria (miles away to locate some).

Starving and desperately trying to get wood and being to breach Jerusalem's walls was bad news enough. Now even more had come. Scouts reported that another larger Fatimid army was enroute to relieve the City (from Egypt). Finally, the Crusaders were able to get enough wood (400 pieces), to built just 2 siege towers. The time was now. On the night of June 14th, the Crusaders launched a two pronged attack on the walls of Jerusalem. They attacked the northwest and southern defense towers. The Muslims defenders loosed arrows of fire and boiling oil in an attempt to repel them. One of the siege towers caught fire. Finally after much blood, the Crusaders breached over the walls.

The sudden onrush of the Crusaders (driven by lack of water and food), proved too much for the Muslim defenders. Many of them died rather than face Christian conversion. Some 10,000 of the populace were drive to the Al Aqsa Mosque for protection. The Crusaders waded into them. It was said that the blood was so deep, it came up to their ankles.
The Muslim bodies were piled up into high pyramids and burned. The fires were so bright that the night sky over The Holy City looked like day! Now the Crusaders set about to looting and pillaging. Anything and everything was taken. Even the local Jewish community was not spared. They too took refuge in their synagogues- only to have them promptly burned around them.  Jerusalem was now in Christian hands. 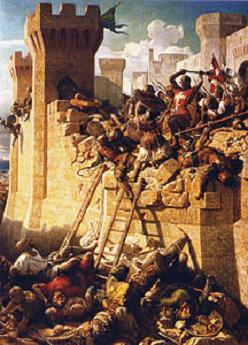